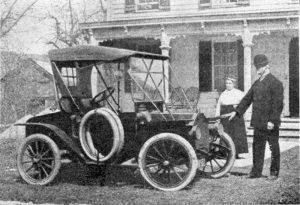 Often, when, watching a line of beautiful modern motor cars pass by the casual bystander will have his attention attracted by a car which has a strange, yet familiar appearance. Closer inspection reveals that in reality he is confronted by a machine built in the earlier days of the industry. So rapidly do the outward lines of motor cars change that it requires a straining of the memory to place the exact period to which the car belongs.

The Buick shown in the illustration is a model 14, of the year 1911. A comparison with the modern Buick shows how, even in that -comparatively brief space of time, the fashion in bodies has changed. This old timer is a striking testimony to the faithfulness of Buick engineering work. The car has been in constant service for 10 years, yet, according to its proud owner, Mr. E. F. Blackmer, of Crown Point, New York, “It is in as good running condition to-day as any car here.” To slightly paraphrase a popular army song, “Old Buicks never die and, never fade away.”