DETROIT A distinctive, luxurious vehicle named Centieme, revealed to the public at the 2003 North American International Auto Show in Detroit, is the latest in a long line of Buick concept vehicles. Centieme (pronounced sent-e-em, meaning 100 in French) was named in honor of Buick’s centennial in 2003. It is designed to combine the best features of a sedan and sport utility vehicle. 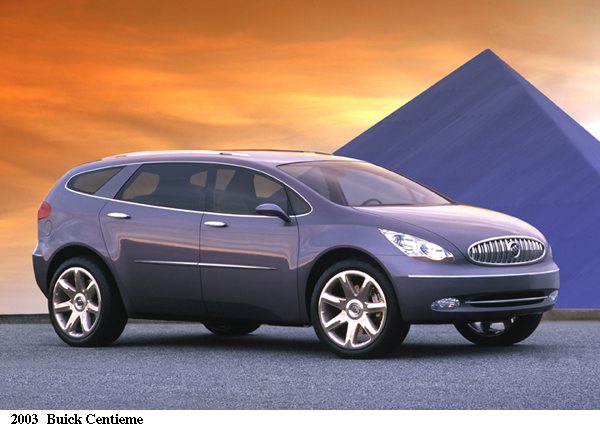 Concept cars were commonly known as “dream” cars in the1950s. But concept or dream car, the idea is about the same. A concept car is a design and engineering, and often marketing exercise, a method of trying out new ideas and generating excitement with the public about a company’s products and expertise. It’s also sometimes a way to tease upcoming production models.

Historians generally claim the first true dream car was a Buick. A black two-place convertible created by General Motors Styling and Buick Engineering back in 1938. It was, and still is, the Buick “Y-Job”, designed by Harley Earl, GM’s first design chief, and built on a production Buick chassis modified by Charlie Chayne, Buick’s chief engineer. 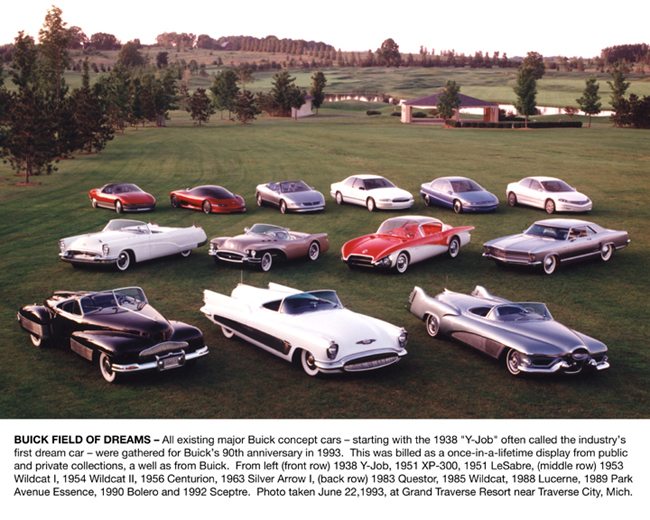 There are various theories behind the name, the most prevalent being that the letter “Y” was used for experimental aircraft at that time. Also, Earl tended to use “job” to refer to his project cars.

In June of 1993, the 13 then-existing Buick dream cars were brought together for Buick’s 90th anniversary, photographed at Grand Traverse Resort near Traverse City, Mich., and appearing at Eyes on the Classics, an auto design show in Grosse Pointe Shores, Mich.

Highlights of the Buick Dream Cars 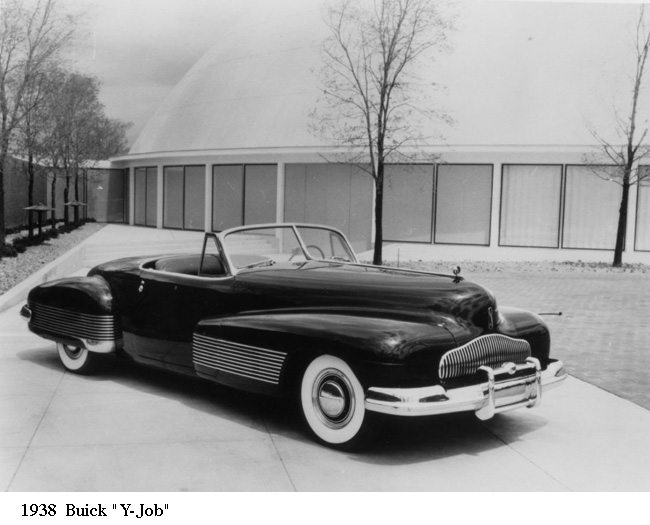 Harley Earl was always striving to make cars lower and longer "because my sense of proportion tells me that oblongs are more attractive than squares." The Y-Job fits that description, strikingly modern and sporty in design, with front fenders swept back into the doors. Other features: a straight 8 engine, [...] 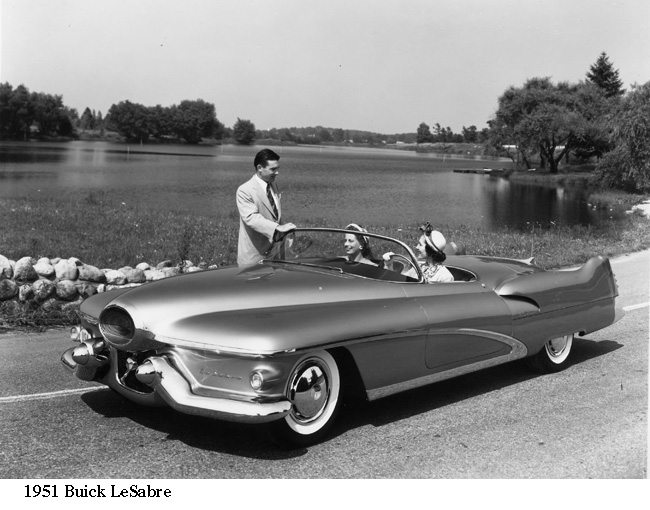 Harley Earl and Charlie Chayne had so many ideas they couldn't put them all in one car. So Earl had charge of LeSabre and Chayne, by now head of GM Engineering, had XP-300 (though he was in charge of mechanics for both). Both cars were the result of a long-term [...] 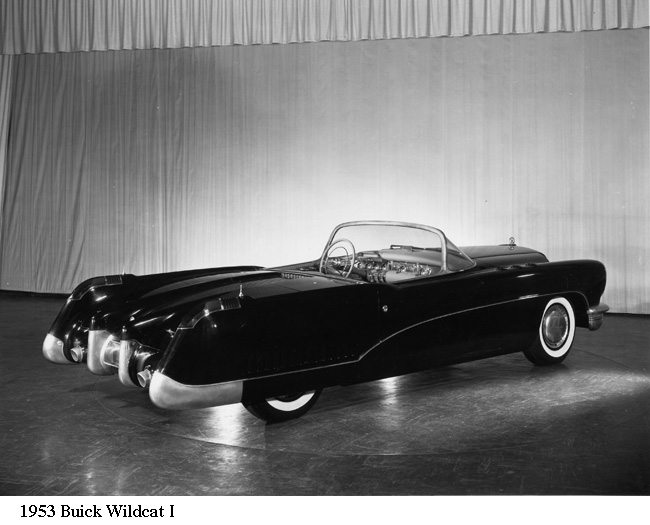 This is a white single-seat convertible with fiberglass body, 188-hp V-8 and Twin Turbine Dynaflow transmission. The front wheel discs are stationary, the wheels revolve around them. This car is in private ownership. 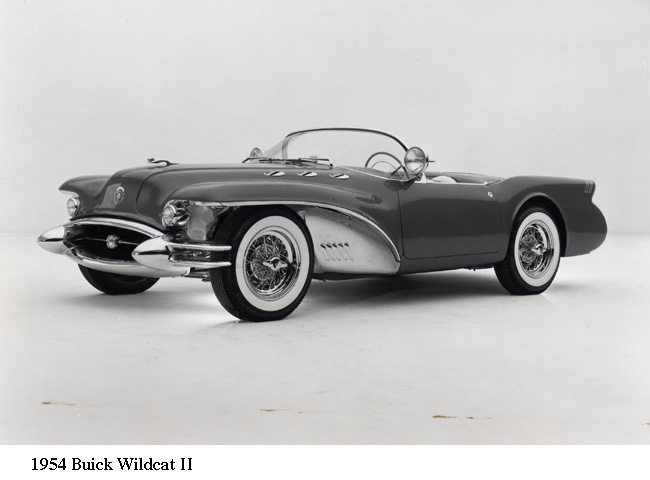 This is a rakish sports convertible. Now painted and trimmed in bright blue (the original color, after being shown for years in tan), it features what Buick called "a revolutionary front-end design with flying-wing fenders that flare straight out from the body, exposing the entire front wheel and part of [...] 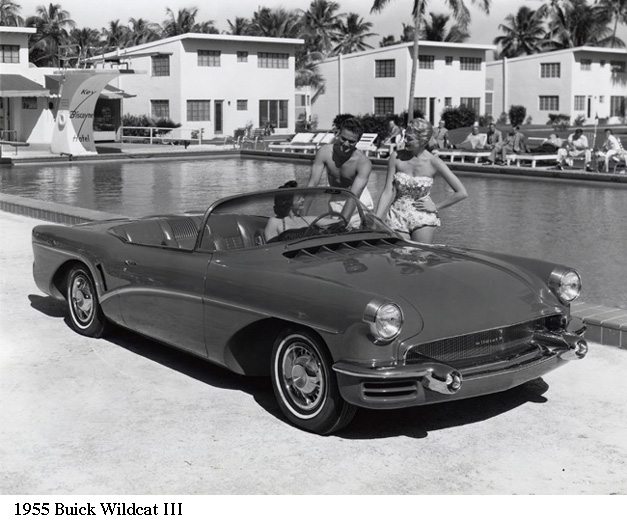 This was a red two-door four-passenger fiberglass convertible with red leather interior. It had a sloping beltline and the rear wheels were completely exposed. The hood sloped toward the front of the car, increasing immediate forward vision. The fine screen grille was wide and low and the parking and directional [...] 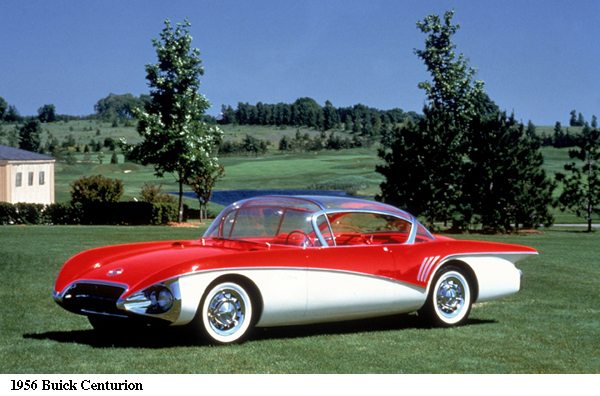 A spectacular four-passenger coupe with fiberglass body and all-glass top, this red and white model was particularly known for its "seeing-eye" television camera in the trunk. The TV camera had a receiver on the instrument panel to replace the rearview mirror. The camera was mounted in a jet plane-like tailcone. [...] 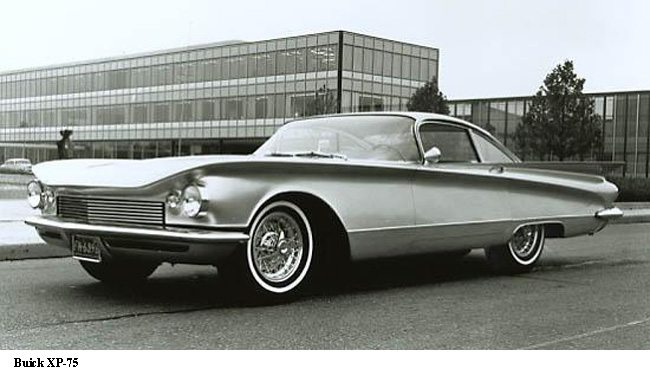 This was a two-passenger coupe with twin white leather bucket seats. It was hand-built by Pininfarina in Turin, Italy. Its wing-like rear fins became a 1959 Buick styling feature and its sculptured metal side treatment a hallmark of the 1960 Buick line. Features included power windows, air conditioning, paddle-type door [...] 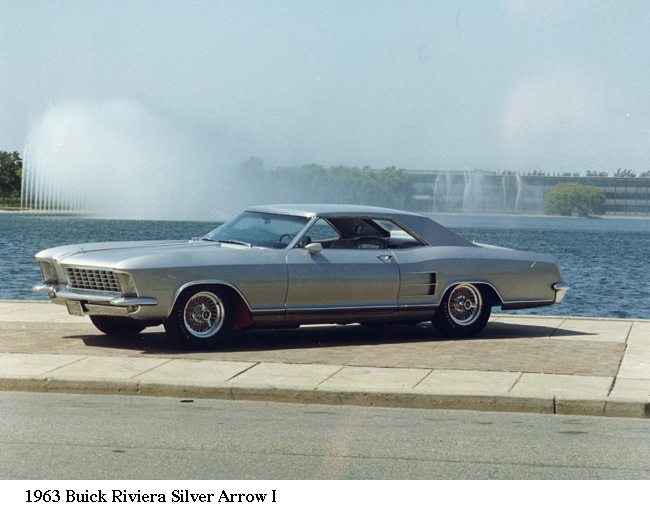 This was GM design chief Bill Mitchell's car and, using the original 1963 Riviera as a base, had a lowered roofline and lengthened hood. (Silver Arrows II and III were relatively minor modifications of production Rivieras.) It is owned by Sloan Museum. 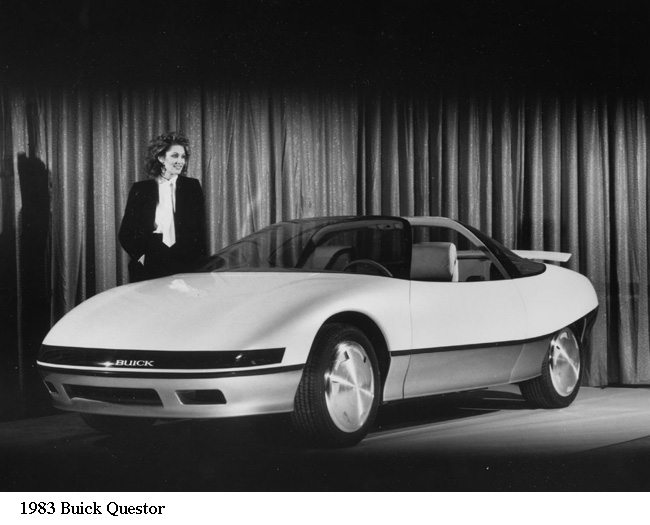 This red fiberglass bullet-shaped model is a non-motorized test bed for innovative ideas in electronics. It was very popular with the press and for several years was on display at Flint's AutoWorld amusement center. It has 14 micro-computers and such features as laser key entry system, automatic system for level, [...] 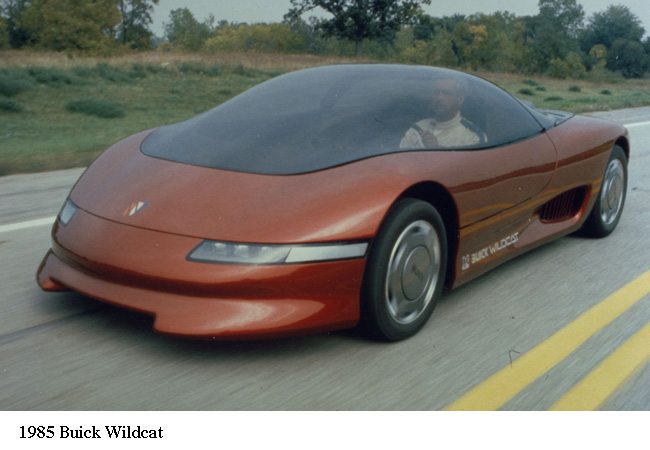 This spectacular red model incorporates four-wheel drive and a McLaren engine based on Buick's 3.8-liter V-6 block, mounted just behind the seats. The engine has 24 valves, dual overhead camshafts and field-programmable sequential-port fuel injection. Unlike other Buick dream cars, this one emphasized engine. The top of the powerplant is [...] 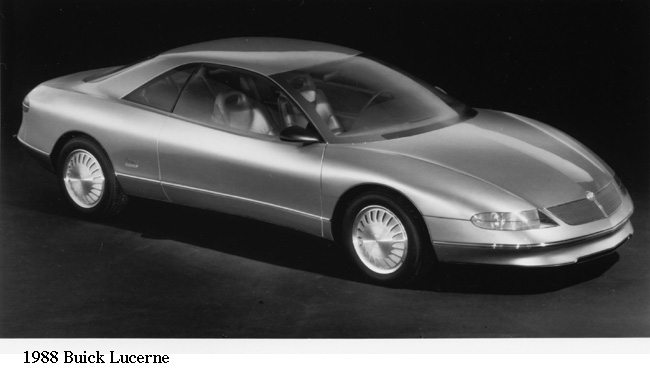 This silver-blue concept car was introduced at GM's "Teamwork and Technology" exhibition in New York in January of 1988. It was described as a prestige/luxury front-drive coupe with exceptional comfort for four adults in stylish environment. It features a Navicar computer navigation system, developed by GM's Delco Electronics Division. Navicar [...] 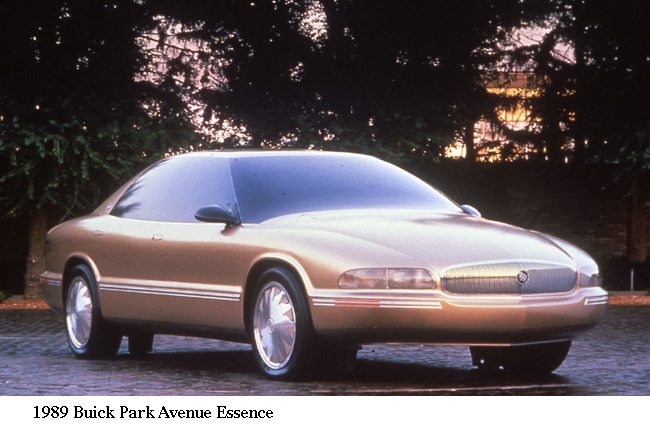 First light green and later white, this sedan was displayed at auto shows as a forerunner of one of Buick's most important cars of the era. The 1991 Park Avenue Essence has graceful contours and instruments displayed in a wide, sweeping panel, and the Delco Navicar system navigation similar to [...] 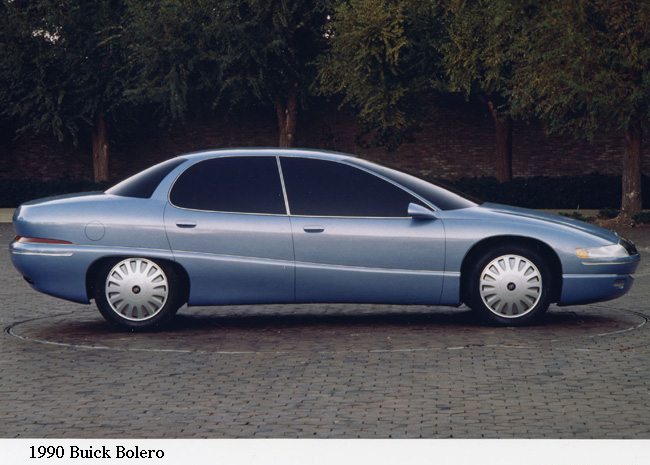 This light blue mid-size car has a 3.3-liter V-6. It was considered a teaser for the 1992 Skylark. Its power is suggested by its aerodynamic shape, with a rear deck slightly higher than the hood. It has a steeply raked windshield, vertical-bar grille and smooth lines throughout. The car has [...] 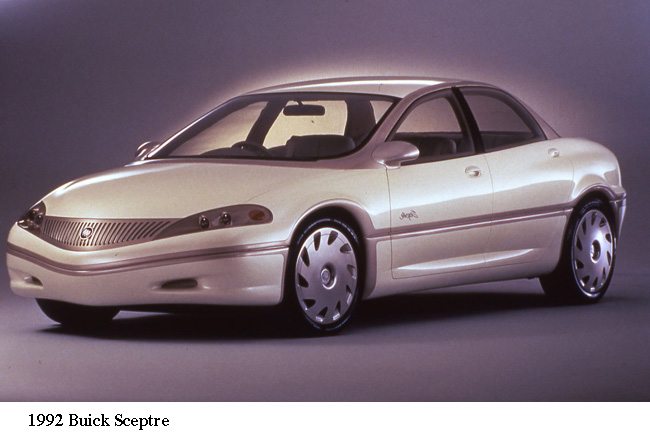 With a hint of European style, this rear drive car was described by then Buick General Manager Edward H. Mertz as "a design statement that could attract those purchasers who have been drawn to the international brands." The white mid-size sedan concept, includes a 3.5-liter supercharged V-6 with an exceptionally [...] 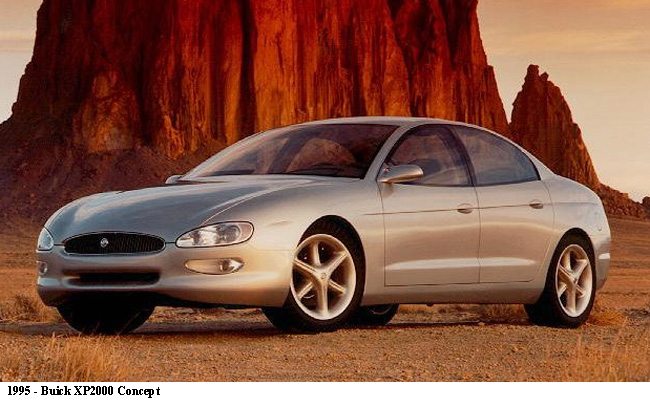 This is an elegant rear-wheel-drive sedan showcasing advanced technology to enhance the convenience, comfort and safety of its passengers, and excellent packaging, the length of a mid-size Regal, wheelbase of a Roadmaster and interior space of a Park Avenue. XP2000 is a five-passenger car with a pearlescent silver-gold exterior color. [...] 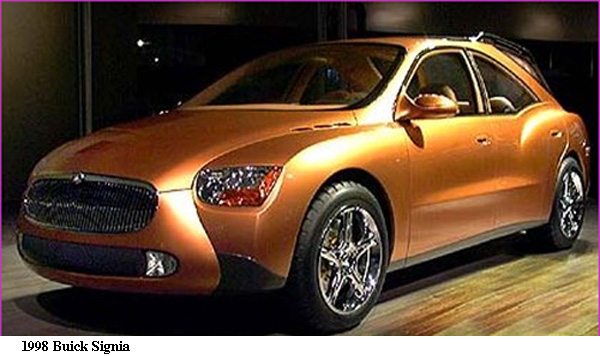 This is a concept multiple-activity vehicle that offers the versatility of a van or sport utility while retaining the comfort, convenience and safety of a premium family sedan (it's based on Park Avenue architecture). Signia is taller, somewhat wider, and significantly shorter than the Park Avenue. It also has higher [...] 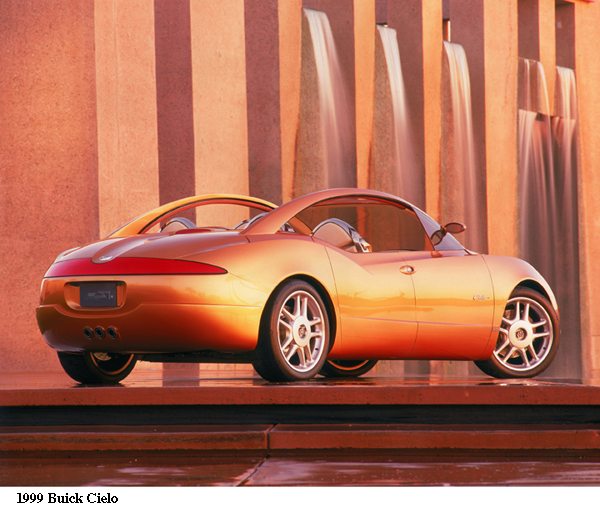 This is an elegant, stylish four-door convertible. Its name, pronounced see-A-low, stands for "sky" in Spanish. It was positioned as a mid-size family car and "no compromise convertible." Two front-to-rear roof rails provide body strength and permit using three opaque panels that slide into the trunk when the driver wants [...] 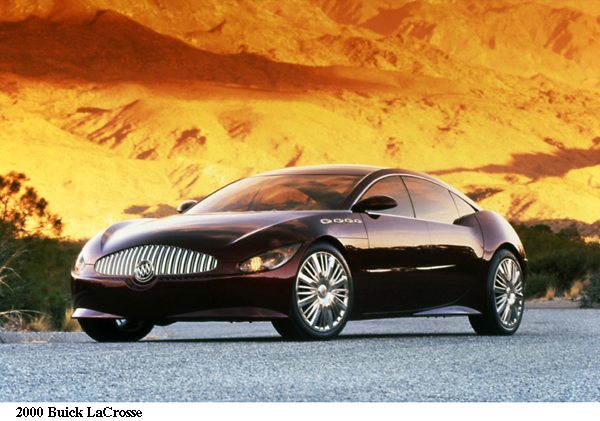 This is a graceful and stylish luxury sedan, painted a deep red wine color, that's quickly converted to a carrier of oversized cargo when panels open to reveal the pickup-type bed. Five-passenger "flagship" combines roominess and comfort with elegant exterior design featuring heritage styling cues similar to Cielo, "sweepspear" side [...] 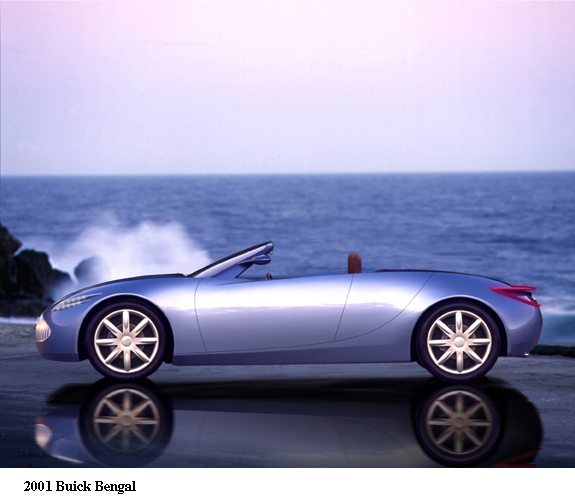 This sleekly sculptured roadster (convertible) features a high-performance powertrain and hidden compartment that holds jump seats or storage space for golf clubs. It also features "wheels forward" architecture and voice-activated controls. This car was honored by AutoWeek magazine as the 'best of the best" of all concepts revealed at 2001 [...]

The Buick Centieme concept is a distinctive, luxurious vehicle that combines the best features of a sedan and sport utility vehicle. Commemorating Buick's 100th anniversary, the progressive design suggests a rolling piece of sculpture, embodying the romance of travel for which Buick is renowned. The four-door Centieme seats six passengers [...]