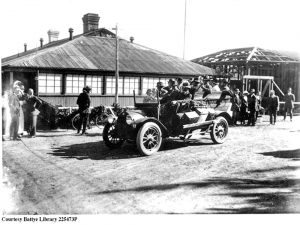 The where or when of this photograph is unknown although quite possibly somewhere in the south west coastal region of Western Australia What we do know is that this very over worked vehicle is a 1916 Buick D4 truck. With a 122 inch wheelbase and powered by a 221 cu in, 4 cylinder engine, Buick built 1152 for domestic sales and 1347 for export. Many of them sold with stripped chassis rather than being fitted with the factory built express body.

The subject vehicle, being right hand drive would be one of the 1347 built for export and most likely came to Australia as a running chassis only. The body appears to be purpose built to transport passengers carrying driver plus two in the front and eight in the back, viz a viz, in fairly cramped conditions. The luggage adds substantially to the load. Buick recommended a 1500lb maximum load for the D4 chassis so with 11 grown men at say 160lb average plus say 30lb each for luggage as pictured the load was probably in excess of 2000lb.

It is unlikely that this was long hall transport, more probably a local shuttle perhaps from the rail head to accomodation.