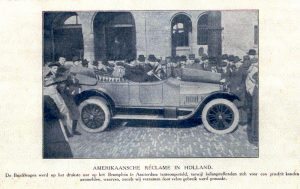 Researched and contributed by Marc McInnes from the original magazine.
We have pleasure in reproducing herewith a photograph received from Mr. T. Schilperoort of Amsterdam of a Buick Car outside one of the Public buildings of Amsterdam, Holland.
In recent years Buicks have made great headway throughout Europe, especially after two years success in the ‘Tour de France’ the greatest and longest trials in the world, and Buicks are the only American Cars to score success in such trials. It is interesting to know too that Buick was successful in the Russian trials in 1914 and it is these successes that have produced, in the Neutral countries of Europe, enormous sale for Buicks.
Posted 02/2004
Tony Gentilcore2017-02-03T18:01:11+11:00February 3rd, 2017|Old Buick Stories|
Page load link
Go to Top