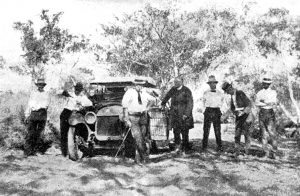 Article reprinted from “The Buick Bulletin of Australasia” January 1921
Researched by Marc McInnes from the original magazine courtesy of Eddie Ford
Selwyn to Baulia Road – Queensland
Selwyn to Baulia, 1918 -Model Buick, Nine passenger, two baskets of travellers samples, and all the passenger luggage. You can only see seven passengers in the picture, there is one in the car and one with the camera.
We are indebted to Mr. H. Lonergan, of Messrs. Stretton and Lonergan, Selwyn, North Queensland, for the “above illustration of a “1918 Model Buick.” In writing, Mr. Lonergan says:
“When this photograph was taken there were nine passengers comprising the load. Only seven, however, can be seen in the picture’one is operating the camera, and one in the car not visible. You will note the baskets of travellers’ samples besides all the other passengers’ luggage. This Buick has been an the road for two and a half years working continually, and has done considerably over 100,000 miles. The gear-box has never been off, nor has the clutch been inspected so far. This will furnish some idea how the Buick will stand up to rough work.” As Mr. James Howard, of Howard Motor Company, says: “Perhaps, in this instance, the Reverend Gentleman may have had something to do with the safe passage of so many passengers over and above the recognised load.”
Posted 05/2002
Tony Gentilcore2017-02-07T16:16:40+11:00February 7th, 2017|Old Buick Stories|
Page load link
Go to Top