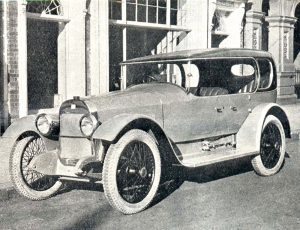 Article reprinted from “The Buick Bulletin of Australasia” September 1922
Researched by Marc McInnes from the original magazine
MELBOURNE WELCOMES INNOVATION
Lane’s Motors Proprietary, Ltd., have sold to Mr. Herbert Brewer, a well-known Melbourne man, a six-cylinder Buick chassis fitted with a high-grade De Luxe Australian touring body, with a Californian top. The illustration gives an excellent view of the graceful lines of the car. The Californian top, which so far as we know is the first of its kind manufactured in Australia, is bound to attract attention. It was on account of the satisfaction he received from a 1918 model Buick that Mr. Brewer decided to invest in another Buick.
Posted 06/2006
Tony Gentilcore2017-02-10T15:56:27+11:00February 10th, 2017|Old Buick Stories|
Page load link
Go to Top