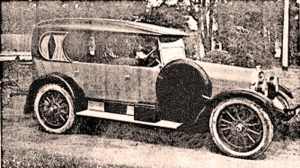 Contribution courtesy the David McCredie Collection and as originally published in Motor Life, October 6, 1923
Dupont Fabrikoid
The car illustrated is a big 49 series. 1923 Buick 6, specially built for Mr R.F.Higgs, managing director of R.F.Higgs and Co, the agents for Fabrikoid, and a very fine example of Australian workmanship.
The unique and interesting feature of the car is the absence of paint, the body and panels having been covered with Fabrikoid material. The body is covered in red and the mudguards in black and as can be seen, the work has been carried out in a most expert manner.
This Fabrikoid covering marks a radical departure from the ordinary method of finishing motor cars, and has proved that it has many advantages. It will last for years, proved by one car which has been using this covering for nearly three years. This means a great saving. Fabrikoid also helps to stop rattling.
An interesting accident which occurred to a car covered with this material shows the saving in money and time. While crossing one of the punts, the front mudguard hit a cart and bent the front portion of the mudguard on to the tyre, so splitting the metal, but the fabric was still intact, with not even a scratch on it. The car was taken to a trimmer and the fabric lifted back just past the part where the guard was damaged, the panel was beaten into shape, without having to be taken off the body, the split in the metal was oxywelded, and the same piece of fabric was replaced, and the whole job only took two hours, as this material need very little attention. The trouble of cleaning is greatly reduced, as one of the big taxi companies, namely DeLuxe Motor Service, have found out, and so successful is it that this company is gradually covering its fleet.
The car shown here, although handsome in itself, is enhanced in appearance by the use of this Fabrikoid. There is hardly a limit to colours or grains, and many combinations can be procured.
A Fabrikoid covered car can be cleaned in a few minutes by simply running a clean rag over the body, and a continual polish is always retained.
Fabrikoid is not an experiment, but has been in vogue in America for a number of years, and many interesting lectures have been given on the subject.
Posted 02/2007
Tony Gentilcore2017-02-10T17:46:24+11:00February 10th, 2017|Old Buick Stories|
Go to Top