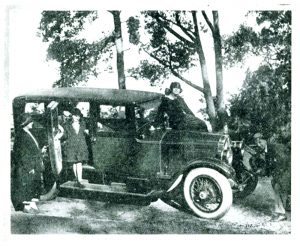 Article reprinted from “Motor Life” August 2, 1924
Researched and contributed by George Seymour from the original magazine.
Sitting on the bonnet of the Buick is Madam Aga Lahowska. Madam Lahowska, who is a prominent member of the Grand Opera Company, is a native of Poland, having been born in Cracow. Whilst in Sydney she met fellow-countryman in the person of that talented pianist, M. Munz, who in this photograph is seen in front of the car. This photograph was specially secured for Motor Life whilst the party were on a trip to Bulli. Madam Lahowska said that the scenery around Bulli was very similar to that of the coastline near Barcelona, in which city she played the title role in Carmen.
Photo vehicle is a 1924 Buick Master Six sedan
Posted 05/2007
Tony Gentilcore2017-02-10T18:21:36+11:00February 10th, 2017|Old Buick Stories|
Page load link
Go to Top