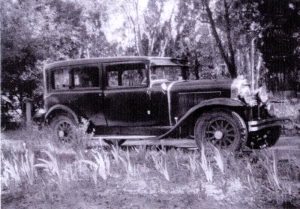 Contributed by Michael Zwar (grandson)
Albert Michael Zwar MLC, a man of the people. He served as a Member of the Legislative Council in the Victorian State Parliament and a minister of the government of the day representing the North Eastern Province and favoured this magnificent 1929 Buick, 7 passenger limousine for his personal transport.
Albert did not drive himself but would have enjoyed the luxury of being chauffeured in this very large Buick. Speculation suggest it may have been a government fleet car issued for his use which he then purchased when it was retired from the government fleet. This could explain why the Buick was first issued with an original Owners Certificate in January 1933 in his wife, Harriet’s name. (see below pictures of Owners Certificate).
Albert was quite a fisherman, pictured below. No wonder, as living in Beechworth he was in the midst of some of Australia’s best trout fishing streams.
The “Silver Anniversary” 1929 Buick, model 29-50L was the largest and most expensive Buick offered. It sold for £845 plus accessories such as the uniquely Australian 2 bar bumper bars ,when you could purchase a Chevrolet or Ford for less than £250 at the time. (yes, bumper bars were an add on accessory in 1929).
Very few of these big Buicks found their way to Australia.
The Australian Buick sales brochure for 1929 described it thus –
“29-50L Series 129-91 H.P. Seven- Passenger Limousine Sedan.
This is an exceptionally fine seven passenger closed car for either chauffeur or owner driver, an adjustable glass partition in the back of the front seat can be lowered out of sight or raised to divide the car into separate compartments as desired. The car is equipped with telephone from rear to front seat. In other respects the Limousine Sedan has the same fine lines and luxurious appointments which make the Model 50 so distinctive and complete.”
The car sat on a 128 3/4” wheelbase and was powered by an in-line OHV 6 cylinder engine of 309.6 cu.in (5.1 ltr) capacity which developed 91bhp @ 2750 rpm.
The last picture shows the Buick as advertised in the 1929 Australian sales brochure
Posted 08/2004
Tony Gentilcore2017-02-12T17:41:39+11:00February 12th, 2017|Old Buick Stories|
Page load link
Go to Top