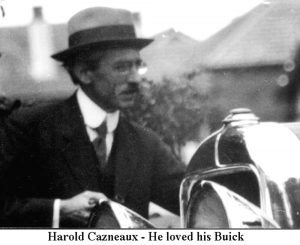 The Buick Car Club is indebted to Mrs Joan Smith who provided the material for this article via country member Bill Denney and then compiled by John Gerdtz.
CAZNEAUX – HE LOVED HIS BUICK!
Editorial note: Cazneaux was not the only member of this family to become a well recognised Australian icon. Joan Smith’s son (Cazneaux’s grandson) is also well recognised for his adventurous feats and other achievements both in Australia and throughout the World. He is Dick Smith.
——————————————–
Although Cazneaux had already owned two Buick cars previous to the “Silver Anniversary” model, it was this third one that appeared to be the symbol of his achievements. It stood for the culmination of all his hard work and earlier struggles in recovering from a severe breakdown from overwork, establishing his own photographic business and supporting a large family.
As a freelance photographer, many of his appointments were at clients’ homes, offices, factories etc. To carry out this work, with all the heavy equipment needed in those early days of photography (glass negatives, large cameras and the like) a car was necessary. All this had been possible with the two previous, smaller Buicks but, with the purchase of the “Silver Anniversary”, with its greater size and power, he was able to confidently fulfill commissions and assignments much further afield. These included BHP at Newcastle, Frensham
School at Mittagong, country properties such as the Dangars’ at “Gostwyck”, Uralla, and the Whites’ at “Belltrees”, Scone, as well as southern New South Wales and Victoria. Mrs Cazneaux mostly accompanied him on these trips.
In addition, with a family of wife, six children and their friends, many appointments at Camden, Bowral, Avoca, the Blue Mountains and so on, became family outings. The Buick sometimes carried up to ten, and on one occasion twelve! Of course some of these were small children.
This beautiful tourer, with its rich dark blue enamel and salt and pepper-coloured hood, attracted admirers wherever Cazneaux went.
The most outstanding performances of this wonderful car would have been when he drove to South Australia. The first trip was to Iron Knob at Whyalla for BHP in 1935. It was on this journey that Cazneaux saw on the skyline the distant outline of the Flinders Range which so called to him that he made up his mind at that moment to return and photograph those rugged peaks. He did return later that year but, owing to dangerous weather conditions, was not able to get more than halfway into the great ranges. However, two years later he was successful, this time accompanied not only by Mrs Cazneaux but also his only son, Harold, who was now 17 (and probably assisted with the driving).
His memories were later recalled in a letter written to Jack Cato saying,
“They sent me, in my Buick car, up to Iron Knob near Port Agusta, S.A. There I saw and felt the impulse of the great inland Central Australia. The mysterious Flinders Range dominating the skyline. This strange attraction ‘once seen – never forgotten’, brought me on several other overland motor trips up through these ranges in the following years before the second world war. Our last trip
included myself, Mrs Caz and our boy Harold then about 17. One of my greatest memories was the way this lad became fascinated by these wonderful arid Flinders – I can see him now sitting on a log outside our camp tent in the peculiar purplish glow of nightfall – with his portable wireless set, which he built himself, (he was trained as a mechanic). “Gee dad isn’t it wonderful – its great”.
In four years this lad, at 21, was laid to rest in Tobruk Military Cemetery – and so he died on the threshold of what may have been a brilliant life. He was gifted in many ways, and I know deep down there was the traits of the artist in his make-up.
My Buick tourer, a big powerful 31 HP car, had 4 overland trips to S.A. up to 1938. This splendid car, now over 20 years old, is still waiting for the other Flinders Range trips – but somehow we have never made them. Perhaps the memory of that clever lad driving my Buick through some of the narrow passes in those arid hills has been too vivid. In any case the war prevented us from going.”
In 1930’s Australia, many of the country roads over which they travelled were hardly more than tracks. Indeed in some areas of the Flinders Range and elsewhere even tracks were virtually non-existent. However, in all the years that Cazneaux owned the Buick, it proved totally reliable, never breaking
down on any trip or boiling, as so many vehicles did in those days, on steep hills such as Victoria Pass. Cazneaux always carried out any general maintenance the Buick needed – he was quite mechanically minded.
Possibly the happiest times in the Buick were the family outings. It was a very close knit family and, in turn, the children were usually allowed to bring a friend.
When World War II began, life quietened down in the photographic business. No more long trips were taken and by 1942 Australia was on petrol rationing. The Buick’s meagre allowance was used mainly to take those daughters (whose husbands were away at the war) and their children on short trips to the beach or bushland. After the war ended and slowly things recovered, the car continued to be used for appointments and family outings. The grandchildren have fond memories of their happy outings in the Buick. Cazneaux’s beloved Buick was one of the most important things in his life after family and his artistic talent – the Buick served both.
Posted 05/2002
Tony Gentilcore2017-02-12T17:54:17+11:00February 12th, 2017|Old Buick Stories|
Page load link
Go to Top