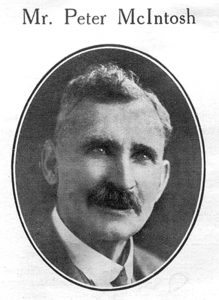 Article contributed by Marc McInnes from text supplied by Mrs D Durrant of the Quirindi and District Historical Society Inc.
The McIntosh family has long associations with the Wallabadah and Quirindi district, first working on the land and later as storekeepers. The brick store dating from 1891 still stands in Station Street, Quirindi, although P McIntosh and Co. sold their interest in it in 1946.
Peter McIntosh, a grandson of the original Peter who arrived in Australia in 1838, also had an interest in flour mills. He and Alex McIntyre started one in 1897 on the corner of Station Street and Borah Creek Road, some distance from the McIntosh store, but he sold out to the Mc Intyres in 1904. An article in the Newcastle morning Herald Feb.9, 1900, refers to P. McIntosh and Co.’s new flour mill at Hamilton near Newcastle. (The McIntyre family also had a flour mill at Hamilton, though they kept the Quirindi mill going till 1929)
Interest in selling cars (especially Buick) is evident in Quirindi as well as Sydney. One of our members managed to find ads for the 4 Cylinder Buick (feb.9, 1923). More research would be necessary to find when their agency began and ended in Quirindi.
Enclosed is obituary from The Quirindi Advocate May 3, 1935
Death of Mr Peter McIntosh
The death occurred yesterday in Sydney of Mr Peter McIntosh, a well-known businessman of Sydney, aged 74 years.
Deceased who was a native of Wallabadah, commenced business as a general store keeper at Quirindi 50 years ago, and later started a flourmill in the same town. Some years later he erected a mill at Hamilton, near Newcastle and subsequently, in partnership with Messrs Gillespie Bros., commenced business in Inverell.
In 1910 the late Mr McIntosh went into partnership with Mr. Alick McNeil as motor garage proprietors in Market Street, and later owing to growth of the business, the firm moved to a larger business in Elisabeth Street and later in Phillip Street.
Deceased is survived by a widow and three sons, Messrs. Thomas, Claude, and Harold.
Posted 02/2003
Tony Gentilcore2017-02-12T21:20:13+11:00February 12th, 2017|Old Buick Stories|
Page load link
Go to Top