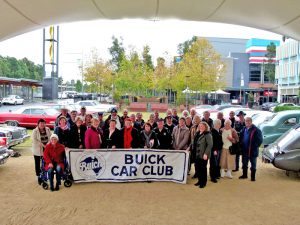 June Run – Display & Concours Day 2003
A very misty Sunday morning when Tony & Barbara left Davidson in the 66 Wildcat Convertible to travel to Rouse Hill Shopping Town. The weather forecast over the previous few days was looking rather dire with storms and heavy rain predicted but at the time of leaving it was raining only slightly which cleared once on the M2. Much of the previous road works were completed and the Toll area was bathed in purple lights as recently seen in Brisbane.
Plenty of distracted motorists were passed, talking on their phones or drinking coffee and not many people out walking the dogs or cycling. An old wooden Cab Truck with a rather long wheelbase and canvas covered tray passed on the other side.
Prolonged rain was evident with it creeping down the walls of the motorway. Wattles were in bloom with some of the deciduous trees still with some autumn coloured leaves. A phone call received on the way questioned ‘Is it still on?’ Past history of Buick Runs/Concours is that they are on come rain hail or shine!
A good run had Tony & Barbara arriving around 0925 with the sun trying to peek through. It was cool for some and cold for others. Buick friends greeted each other, chatting and with the bonnets up the boys congregated around. Cars and passengers dribbled in with Phil & Mary Green arriving in the very latest restored baby. Last to arrive were Graham & Narelle Weekes and their excuse was ‘ The bed was too nice’
Thank you very much to CMC Judges Paul Coggiola & Malcolm Harrild who got stuck into the job through some rain.
Many participants took off for coffee at Michel’s with some furniture re arranging and Happy Birthday to Kaye Pendleberry. Claus came up with a new taste of Jam & Cream on Raisin Bread and Ben enjoyed his favourite Vanilla Slice this one being a Napoleon!
Visitors for the day were: Frank Hall, Mark & Jill McInnes from GMH
At various times through the day groups of ladies took the opportunity to do some shopping, window and purchasing of some bargains. Everyone enjoyed lunch in the food court with lots of choices.
After lunch, back at the Town Green the Group Photo was accomplished and the Winners announced. Congratulations to the following winners and runners up:
Veteran: Not contested
1920-1929: Peter & Gwen Allen 1929 Marquette
1930-1939: Phil & Mary Green 1937 Century Sloper Sedan
Runner Up: Hans & Alison Spannenberg 1938
1940-1949: Owen Mansford 1948 Sedanette
1950-1959: Colin & Dawn Castle 1950 Super Convertible
Runner Up: Ben & Michelle Spannenberg 1953 Super Riviera Coupe
1960-1969: Graham & Narelle Weekes 1963 Skylark
Runner Up: Hans & Alison Spannenberg 1964 Skylark
1970-Modern: Len & Kaye Pendlebury 1975 Electra
Runner Up: Bob & Jan Calleo 1979 Riviera
Grand Champion: Phil & Mary Green
Restoration of the Yr: Phil Green 1937 Century Sloper
Most Commendable Effort: Colin Castle 1950 Super Convertible
Rouse Hill Town Centre Prize: Phil & Mary Green
More chatting and people started dispersing to travel back home after a pleasant day. Coming back from the last coffee for the stragglers, Hans was in trouble so with some Buick & shopping volunteers the car was jump started.
The trip home was uneventful except for the rain.