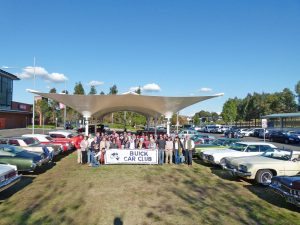 Article and photos, Barbara Gentilcore
Concourse 2014 Sunday 22nd June
Barbara & Tony left the North side of Sydney around 8am in the 71 Riviera with the sun streaming through the clouds. Galahs and Lorikeets were scratching on the footpath for bugs and seeds, dog walkers and cyclists doing their usual Sunday morning thing!
Some time further on Tony says, What’s that rattle? I haven’t heard that before. Further along the freeway the skies became grey and overcast. Tony had forgotten the E’tag, Barbara left her phone at home and wasn’t sure that the iron was turned off! Oh well hopefully the house will still be there! The occasional splash of autumn colour was still around but mostly trees were bare of leaves.

Light rain was falling when turning onto Old Windsor Rd and cleared up by the time Rouse Hill Shopping Centre was reached. Tony parked with the other Buicks on the shopping centre green for the display and concourse. This is a great venue for a Concourse with plenty of shopping for the ladies especially sales, plenty of eating and coffee places as well.

Judges: Malcolm Harrild & Paul Coggiola from the CMC did a great job again this year. Thanks very much.

A large group were off to Michel’s for coffee. While they had 6 young ladies working there, sadly service was spasmodic and slow in the newly renovated cafe. Tony had been showing someone an app called Pandora on his phone which had been playing Baroque music. He wondered why classic music was following him everywhere but didn’t realise it was coming from his pocket until he went to the toilet and ‘Tony tinkled to Baroque’!
Many different lunch venues were sampled by the Buick members. The sitting circle on the green became bigger as more joined in to soak up the sun and get some Vitimin D. Maggie was doing patchwork and Barbara knitting unique squares for ‘Wraps with Love’

Many conversations over open bonnets and in small groups around the cars. There was quite a lot of public interest. The Ladies checked out the sales and did some grocery shopping. Announcement and Group Photo happened at 2pm. The Rouse Hill Town Centre People’s Choice was Owen Mansford. Congratulations Owen. The Manager for the Day Mark, thanked us for coming to the centre and was thrilled to see so many cars.

Congratulations to the winners of Decades:

Barbara went for a look at some more of the shops while Tony and others were discussing things under various bonnets and solving mechanical problems etc. Members started to leave around 3pm with a few stragglers still there around 3.30. So one last coffee Barbara & Tony left around 4pm with a good trip home.