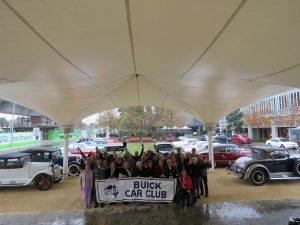 We look forward to this event every year but the weather forecast was not so good with another low pressure system like the one a couple of weeks before which devastated parts of Sydney. Calls went out among the committee about postponing it but no “the show must go on” it was decided and it did.
We were lucky to have good cover for the judges in our usual spot at the Rouse Hill Town Centre and it wasn’t too cold or wet for the most part. It didn’t matter because we had a big modern shopping centre for some retail therapy for the ladies and even a cinema complex if one felt inclined.
Considering the damp conditions we had a pretty good roll up of 19 Buicks and thanks to those that came from the Hunter and Central Coast. We all had a good time chatting, eating cake, drinking hot coffee and looking under hoods. There was a wide assortment of lunch options in the food court which most took advantage of.
It was good to see Paul White’s dark blue recently acquired 1936 4 door sedan which was a very sharp looking vehicle and won his class.
Three independent CMC judges stepped up to the plate and did a thorough job as usual and the conditions didn’t phase them. One fellow even came in his shorts and thongs for goodness sake.
At 2pm we assembled for the traditional group photo which Barbara usually takes from a lofty ladder supplied by the centre but not this year. Occupational Health and Safety has caught up with us and it was not permitted but one of the guys from the centre was happy to take the picture for us so no big deal. It meant she could be in the photo for a change (that’s her on the far left).
To sum up it was a great day out in our Buick and much better than sitting around our home. We managed to get home just before the heavens opened up.
Hope to see more there next year.
Tony Gentilcore.
WINNERS:
1920-29: Geoff Ward 1928 Tourer
1930-39: Paul White 1936 8/40 Special
1940-49: Uncontested
1950-59: Colin Castle 1950 Super Convertible
1960-69: Hans Spannenberg 1964 Skylark Coupe
1970-Mod Claus Gronau 1972 Riviera Coupe
Car Under Restoration: Hans Spannenberg 1963 Electra Convertible
Centre Manager’s choice: Greg Massey, 1968 Riviera
GRAND CHAMPION: Tony Gentilcore 1965 Riviera Gran Sport