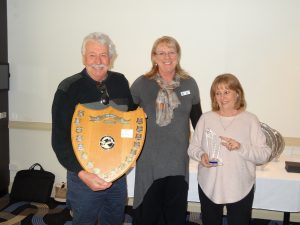 It was a lovely sunny day with clear sky when Barbara & Tony Gentilcore left Davidson on the Northside in the 65 Riv. Golden wattles were blooming in gardens with a few glimpses of remaining autumn leaves but most of the trees were bare. The Sunday cyclists were out in force.

‘Where is that rattle’ is the conversation along Mona Vale Rd.

After much fiddling, pushing, holding etc the comment was ‘will have to get the stethoscope out’

The recently fixed cruise control was tested as were the brakes to bed them some more! There apparently is also a knob that can be used to accelerate as part of the cruise control which was also tested. The new steering wheel was very comfortable and the new horns sounded OK too.

The journey continued along the M2 checking out the newly installed Kinetica installation which Barbara managed to get a reasonable photo of going past, then on to Pennant Hills Rd and within a half an hour the destination of the West Pennant Hills Sports Club was reached.

The club is very modern looking with plenty of parking so Tony started a display area.

The trophies were all set up and people were arriving, greeting and chatting until Virginia welcomed the 51 people present and lunch was served. A lovely main was followed by the trophy presentations by President Virginia with Barrel Girl Barbara G.

Congratulations to all the Winners and Runners Up.

Virginia expressed thanks to committee members who weren’t continuing – Don Rothnie & Lloyd Bracher and introduced new members Bob Farrow & Barbara Gentilcore to take over those vacated roles. Bob is taking on the Gourmet Run and was busy chatting about it and gathering names and numbers. Barbara is taking over Meeting Program organising guest speakers and cars for ‘Show n Tell’

Dessert was served along with tea & coffee. Much conversation was happening at all the tables with some musical chairs and Tony was busy photographing. It was lovely to see George & Kerri Gillott, Lloyd & Nanette Bracher, Ray & Susan McMaster, John & Barbara Gerdtz and some of the newer members Rod & Susan Learmonth, Kim Osborn and Peter James & Kerry Simpson.

Foundation members present were recognised as Virginia mentioned that this year is the clubs 45th birthday and then the announcement for Clubman of the Year who was Mike Doggett a quiet, busy achiever. Congratulations Mike. Unfortunately Mike was not present as were a few other recipients and they will be presented with their trophies at the next meeting.

The luncheon broke up reluctantly in the club around 3.30 and some just moved into the car park where impromptu Spanner & Natters occurred with hoods up.

The club function staff were very efficient & accommodating and should be complimented for the management of the Buick function. According to the Manager they would be very willing and able to accommodate any other functions that the Buick Club might like to have there.

Tony & Barbara left the club just after 4, missed the usual turn off for Lane Cove Rd so went down Delhi Rd through Chatswood for a change. The sun was shining through the tall gums near the National Park. Lots of changes have taken place along that road and in Chatswood.

Twas a lovely day. Thanks Geraldine, that was a great venue!

From the pen and camera of Tony & Barbara Gentilcore