Hard to believe but it did happen:
The 25 was first; climbing hills on route to Oberon she played up. I was sure it was fuel; no phone reception so the others sailed into the distance. Vac tank Ok so I was starting on carby when Peter and Geoff came back: “What about electrics?” turned out to be a failed condenser and would you believe that the three of us each had a spare. 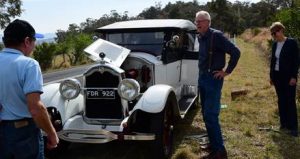 Bertha had several other OhOh moments with random fuel supply issues and the generator stopped working. Luckily we sourced a substitute brush locally and resized it by rubbing against a concrete path. 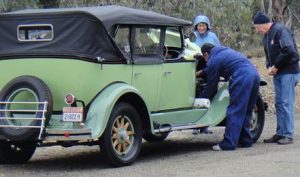 I know it doesn’t happen but the Marquette had an issue” as we crossed the Lachlan River. Peter cleaned the carby jets and all good. Very minor but we need to keep tabs.

Geoff tried really hard not the mention that his was the only car running issue free, but it did slip out a couple of times. ………and then cruising out of Leeton the 28 joined the club. “It’s electrical for sure!” so after two condensers and a coil change. “Must be fuel!” the vac tank was innocent so carby must be blocked. Will have to remove carby so better turn fuel tap off………….hang on; it’s already 90% off. We all laughed pretty hard; apparently the tap wasn’t quite locked open and had vibrated closed. So each time whilst he “fixed the electrics” the carby got a drip feed and fired up. It still counts as a failure to proceed so I sent Geoff a copy of the snap with that caption and his response is included. (only a Tax guy could write this) 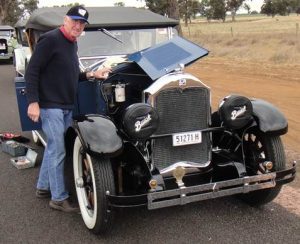