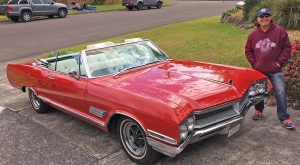 HoHoHo! The time has come and well overdue for Santa to elaborate to his fellow Buick Club members on how he became a PRIVILEGED owner of a Buick.
Not just a Buick!!! A 1966 Wildcat Convertible. ‘Red’
Well it was a sultry Saturday evening of December 2014 when Santa and Mrs Claus had finished visiting and spreading the Christmas cheer to the residence of Tamara Place Beaumont Hills in North West of Sydney.

As we were departing to go back home ‘The North Pole’, Mrs Claus suggested we cruise around for a while and take in the local scenery of Christmas lights. Well ! Am I glad we did.
Some how we ended up in Round Corner Dural, stopped at the intersection set of lights of Kenthurst road and Old Northern road when all of a sudden we heard this BEAUTIFUL roar. A V8 ROAR. ‘Music to Santa’s ears’. With that roar came a flash of beauty. A red beauty.
Mrs Claus said ‘Did you see that?’ Oh yeah I replied. I think it was a Caddy quipped Mrs Claus. No woman, that was no Caddy I replied with gusto.
Then what was it? asked Mrs Claus, your the expert on American cars. Not sure, it was too fast. Definitely not a Caddy, not a Lincoln too big for a Camaro.
Before the word Camaro came out, Mrs Claus dropped the clutch, burnt rubber while running the red light to give chase to the red beauty of a beast that flashed and dazzled before our very eyes. That sang wonderful music to Santa’s ears.
‘Slow down, do you want to get a ticket or get us killed?’ Santa panicked. Well all I can say is Thank God Mrs Claus was driving and has no sense of colours. Traffic lights colours!
As we came around the bend, there she was. Parked on the side of the road. Before Mrs Claus came to a halt, Santa had his seat belt off, door open and away he went.
Ran up to the drivers side, stunned to see a good looking bird in the driver’s seat to whom Santa had startled.
Well so I thought. I didn’t know it was a left hand drive. As it turned out, Tony was driving and Barb was in the passenger seat. Tony and Barb were lost. ‘Thank you Lord’. As it turned out it was a great night for all.
Santa had the opportunity to talk with Tony. Explained how he was looking for a Santa Mobile as the Aussie heat is to intense for the Reindeers. Not just any mobile, an AMAZING head turning mobile that says ‘Hey there goes Santa’. Tony explained ‘Well Santa this is your night. The Buick is for sale’.
We exchanged details, Santa had given Tony his Santa card, we arranged to get together in the New Year and discuss the possibility of the Wildcat becoming the new Santa Mobile.
To date my Wildcat HASN’T disappointed or let me down.
Bloody Awesome! Santa is very happy, the Reindeers are relieved, Mrs Claus is very proud and as for Tony and Barb. Well !!! Sad to see the Wildcat go, but truly happy that Santa has it.
Tony and Barb get to see the Wildcat often as Santa and Mrs Claus keep in contact and remain GOOD friends.
A true story.
HoHoHo Kind regards
Santa aka Vince Bosco
P.S Santa would like to thank all members of the Buick Club of N.S.W. for supporting his charity. Westmead Children’s Hospital. It was also a great day at the annual Christmas Party.