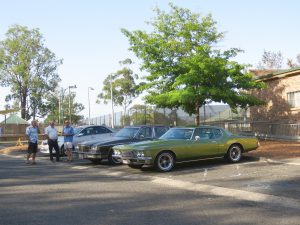 Barbara & Tony left the Northside 0745 on a dull and overcast morning. Along Mona Vale Rd the usual Sunday chiclisti (cyclists) were riding in large and small groups going both ways.Onto the M2 the new areas of ashpalt were very smooth and the tall gums were blooming cream blossoms. Noticed a few Porsches travelling towards the beach.

Onto the M7 eventually started climbing and arrived at the congregation point of Glenbrook Information Centre. Greetings all round and lots of chats some under bonnets! The Information centre was a good source of maps and leaflets with some interesting concrete slab carvings out the front telling some of the history of the area. The Hall next door was used as a 2nd hand book and record place so some of the Ladies had a look until it was time to go.

After half and hour everyone drove up the mountain and through the main drag of Leura onto the Bakery for pies, sweet goodies and coffee. Arriving at Gordon Falls Park, parked once the bus was through the narrow street and set up Camp Buick for morning tea. The pleasant park was strewn with large rocks, trees and some native plants and a playground and much needed amenities.

11am was our appointed time so some stayed behind while everyone else walked up to ‘Leuralla’ a Historic Mansion, Toy & Train Museum. The current house was built between 1910 and 1914, the design influenced by Frank Lloyd Wright of a Federation Free Classical Style.

The Museum has the Southern Hemisphere’s largest collection of toys, trains and associated memorabilia. Many of the rooms are filled with display cases of Barbie Dolls, Meccano, toys, dolls, planes & trains. One of the rooms was set up as a playroom, one as a display for family photographs of the Evatt family and others as bedrooms of the era.

Was exciting for the adults watching when the Model train outside actually worked when the slot was fed!

As the home of the Katoobma Music Society in the 30’s Leuralla hosted numerous interesting musical guests. During the 1954 Royal Visit the house welcomed Her Majesty Queen Elizabeth II and the Duke of Edinburgh.

Linda, Barbara & Geraldine ventured over the road to Elysian Rock Lookout, across the Buttenshaw Bridge to another lookout. The view over the Jamieson Valley was absolutely spectacular to the Three Sisters & Mt Solitary. The rock formations on which the lookouts were situated were amazing. The girls then went back to the Gordon Falls Park via a bush track picking up Ron along the way.

Lunch was enjoyed, with everyone chasing the shade and annoying striped bees/wasps after the food.

The Weekes family tucked into some big pies. Hope they tasted good.

Attended: Castles with Anne Marie and Linda Farrow as passengers (50)

Leaving around 3ish Barbara & Tony followed Mark for some distance until he peeled off home.

Lovely clouds in blue sky, Rock walls or iron colour and a couple of trains on the uneventful trip home. Traffic was pretty good for a Sunday afternoon.

Another great monthly Run thanks Geraldine.

From the pen of Barbara G.